Franklin Graham, son of evangelist Billy Graham and founder of Samaritan’s Purse, an evangelical relief agency serving children worldwide, was an early Trump fan and a proponent of the Muslim ban. When asked this past weekend how he could square the mission of Samaritan’s Purse with a refusal to allow Syrian refugees to come to the US, Graham was clear that there was no conflict because, in his words, the status of refugees is “not a Bible issue.”

Above, Franklin Graham repeats his claim that “true Islam” is an “evil and wicked religion.” Though he says that millions of Muslims are “wonderful people,” these are the ones who want to leave the faith, as “true Islam” teaches violence against women and children.

Now, if there was ever a case for teaching the Bible in public schools, Graham is it, because the little Christian college where he attended certainly didn’t do its job of teaching him even the most basic outline.

But Graham’s failure to understand the Christian duty to welcome the stranger is just one of the problems with his response. Here is what he said:

Everything about this response is backwards. Graham sets a limit to Christians’ love, kindness, and consideration. He describes these as our “wants” when, in fact, they are our obligations. Acting as if caring for the stranger is an option is far from the “wideness in God’s mercy” that Christians themselves know. Graham’s love ends at the border, his citizenship belonging to the nation, a notion Paul preaches specifically against.

Graham has certainly read the Scriptures that call Christians to love immigrants and refugees as if these people were their own Savior–Exodus 22:21, Leviticus 19:34, and Deuteronomy 24:17 from the Hebrew Bible, and Matthew 25: 25-26, 31-40, John 17: 16, Philippians 3:20 and others from the Christian Scriptures. But he roots his understanding of them in fear. Look at his last line:

“Because of the dangers we see today in this world, we need to be very careful.”

Here, careful means fearful. The screening process we had in place for refugees and immigrants was already careful. That’s why we have had zero terrorism attacks from people born in the nations targeted by Trump’s Muslim ban. Our system has worked remarkably well.

But Graham calls on us to reject care for others and replace it with fear of. “The world is dangerous!” he tells us. But Christians know this. The most frequent command of scripture is Be not afraid. That’s because fear is human, and it’s often reasonable. There is a lot to be afraid of. If Christians didn’t have something to be afraid of, God wouldn’t always be telling them, “Don’t be afraid!” Instead, God calls Christians to go to the scariest places and yet commands them to be unafraid. Being unafraid here is a discipline, a practice that Christians must work on continually so that when God calls them to do a scary task, they can say, “I am the Lord’s servant. May your word to me be fulfilled.”   Cowardice is disobedience.

Graham takes his followers in the exact opposite direction of Jesus–toward fear. He uses danger to justify lack of love. But that is never the model of Jesus. The Scriptures never reveal a Jesus who is afraid–though he is a homeless child, a refugee, the target of a massacre, a man rejected in his hometown, betrayed by a friend, abandoned by some of those closest to him, executed through state violence. He has every reason to be afraid, yet he tells his followers, over and over, to be bold.

Christians are called to run toward danger. God promises Christians peace, not safety. Graham needs to buck up. And if you are a fan of Graham’s or attend a church where his ideas are preached, call attention to the ways that he preaches a message of cowardice. 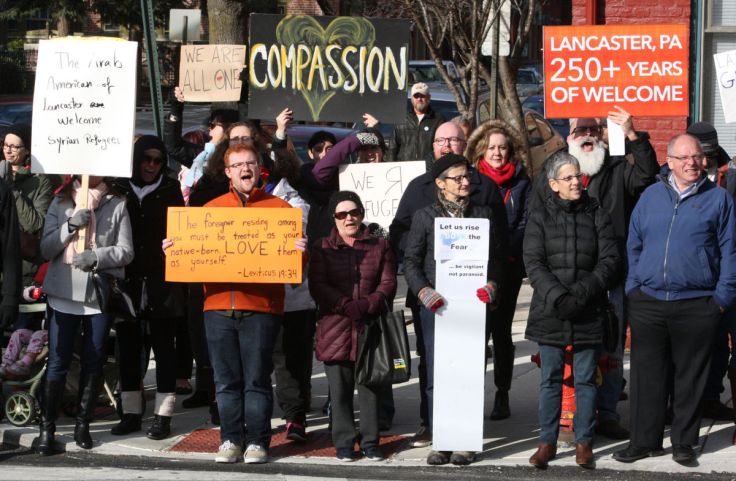 Above, folks in Lancaster, whose community has been strengthened by immigrants and refugees, oppose Donald Trump’s illegal order to prohibit immigration and refugee resettlement.

There are many ways that Americans can support the people of Syria, including by supporting the work of Mennonite Central Committee, a long-time presence in the region and a partner to local organizations working to insure the safety of Syrians.  The welcome of Mennonites is one reason why my hometown, Lancaster, PA, has 20 times more refugees per capita than the rest of the US.

One thought on “Franklin Graham, Stop Being a Coward”